For over a decade a proposed highway realignment has been a thorn in our community's side. It has been much like the plot of a horror franchise that you are familiar with; a monster arises out of seemingly nowhere to threaten a group of people and after some time the efforts of the protagonists put the monster away *for good*. Inevitably, a sequel comes around and the monster returns from the dead because of a loophole or missed plot point, to be vanquished once again and forgotten about until there is a third movie. Valleyview's monster is the highway bypass. Every so often the proposed bypass would slip out of sight and out of mind until, inevitably, something would bring it back to life. Most recently it reared its ugly head again in 2020 so the Chamber made it a top priority to have the plan axed once and for all. We wanted to see the plan taken off the shelf, where it was constantly resurrected from, and into the garbage bin. We are happy to announce that we have been successful. Thanks to efforts by the , the and persistent work by , we have received written confirmation from Minister of Transportation, Ric McIver, that the project is no more. The letter provided by Ric McIver's office is effectively the silver bullet, wooden stake, proton pack etc. that we needed. Finally, the project has been relegated to history and Valleyview will no longer be haunted by the bypass.

Planning at the municipal and provincial levels repeatedly had to account for the "future highway corridor" presented to residents at an open house in 2010. According to the functional planning study a series of interchanges would be placed to the north, west and south of town directing traffic around Valleyview by several kilometers. That plan had no economic impact assessment, funding or political will to go forward however, the damage was real. Since municipal planning had to account for it, any interested developer or business was made aware of the apparent fact that Valleyview would soon be bypassed. A seemingly harmless study became a growth killer. Studies from elsewhere have shown that town's of our size struggle with a change like the one proposed. Due to that worrisome fact, and the imminent renewal of the Intermunicipal Development Plan between the MD of Greenview and the Town of Valleyview, we decided to act. 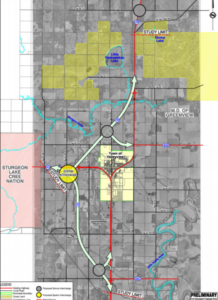 Thanks to dozens of phone calls, emails and letters Valleyview and the surrounding region can celebrate. Development of our highway service industry can continue along Crocus Hill Gasoline Alley without the risk of suddenly losing the majority of traffic to the bypass. Farmers, ranchers and land owners in the surrounding countryside can go forward with plans they have for their properties confident that they will have time to pay off. Residents and business owners can also breathe a sigh of relief knowing that there is one less risk to the value of their homes and businesses. 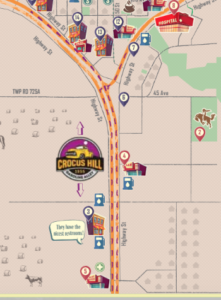